The study may provide an alternative approach to use hydrogen as a source of clean energy.

In an effort to produce clean energy from hydrogen gas, researchers have designed a new catalytic system that operates under room temperature environment. Since hydrogen produces water as the sole by-product upon combustion, this study may provide an alternative approach to use hydrogen as a source of clean energy.

In the study, a dual catalytic system combining photo-redox and proton reduction catalysts has been used. Researchers explained that the staring material (amine) was taken in a vial along with the catalysts in degassed Milli-Q water under an argon atmosphere. The reaction mixture was irradiated under visible-light, using 36 W blue LED light bulb strips, at room temperature to get desired dehydrogenated product with the concomitant generation of molecular hydrogen.

“The removal of dihydrogen atoms from adjacent atomic centres of organic molecules is a thermodynamically uphill process. However, this challenge was successfully addressed by designing a dual catalytic system by merging visible-light photoredox catalysis with proton reduction catalysis,” says Dr. Ekambaram Balaraman, Scientist and corresponding author of this study.

“In this country, energy and sustainability are among the biggest challenge humanity faces. We believe that our strategy might have significant impact on energy storage, clean environment, and sustainable chemical synthesis,” he added.

The research team included Manoj K. Sahoo and E. Balaraman, and the study was published in journal Green Chemistry. The research work was funded through Science and Engineering Research Board, and IISER-Tirupati.

Reference:
Room temperature catalytic dehydrogenation of cyclic amines with the liberation of H2 using water as a solvent

Understanding of the message from the gut to the nervous system may provide broad insights into the modulation of behaviors such as appetite and anxiety that are also linked with the sickness behavior syndrome.

Humans are not the only ones who hate germs, even the tiny worms try to run away once they recognize harmful microbes. While it could be the psychological issues for humans but running away from pathogenic bacteria is a matter of life and death for tiny worms like Caenorhabditis elegans. Therefore to improve the chances of survival, organisms need to recognize potential pathogens and defend themselves.

Now researchers Dr. Jogender Singh and Prof. Alejandro Aballay from Oregon Health and Science University, USA have shown that in worms bloating of the gut caused by pathogen infection helps both in recognition of pathogenic bacteria and activation of defense mechanisms. The results of this study were published in the journal Development Cell.

“We asked why the animals require a few hours to learn that what they are eating is harmful. Surprisingly, our initial results suggested that gut bloating caused by infection led to the pathogen avoidance behavior. However, it was difficult to understand how gut bloating was affecting behavior—a response that is normally controlled by brain or the nervous system,” says Dr. Jogender Singh, co-author in this study.

To understand this puzzle, researchers monitored changes in the nervous system as the gut of animals bloated. “It all made sense when we found that bloating of the gut was sending signals to the nervous system”, said Dr. Singh.

In an organism, message from different tissues are received and read by different receptors in the nervous system. Interestingly, similar forms of the receptor, that receives message from bloating of gut in worms, are also found in humans and other animals. These receptors are involved in the control of a diverse set of behavioral processes, including appetite, biological clock, and anxiety.

Prof. Alejandro Aballay says, “Understanding of the message from the gut to the nervous system may provide broad insights into the modulation of behaviors such as appetite and anxiety that are also linked with the sickness behavior syndrome.”

The study was supported by grants from the National Institutes of Health, USA.

Study provides a new framework to further improve the on-going clinical programs to modulate the human complement system with direct therapeutic implications in a wide range of inflammatory disorders including rheumatoid arthritis and sepsis.

Of these, complement protein C5a works by activating two different membrane receptors, C5aR1 and C5aR2. The interaction of C5a with C5aR1 and their downstream signalling are critical in many inflammatory disorders such as sepsis, inflammatory bowel syndrome, rheumatoid arthritis and psoriasis. Therefore, a better understanding of C5a-C5aR1 interaction, and novel approaches to modulate this important signalling system has tremendous therapeutic potential.

Now in a collaborative study, research team led by Prof. Arun K. Shukla at the Indian Institute of Technology in Kanpur (India), and the laboratory of Prof. Trent Woodruff at the University of Queensland (Australia) have identified that a synthetic peptide C5apep derived from, and modified based on, C5a sequence- may provide an alternative therapeutic candidate compared to currently used ligands. The study is published in the Journal of Biological Chemistry.

“This is the first example where a designer protein is utilized to fine-tune the key cellular processes in the human complement system which is absolutely critical for body’s immune response. Our study provides a new framework to further improve the on-going clinical programs to modulate the human complement system with direct therapeutic implications in a wide range of inflammatory disorders including rheumatoid arthritis and sepsis,” said Prof. Arun K. Shukla.

The receptors C5aR1 and C5aR2 belong to a large family of cell surface proteins known as G protein-coupled receptors (GPCRs) and they are present on immune cells like macrophages and neutrophils. Most of the currently prescribed medicines act on GPCRs and work by turning them “on” or “off” i.e. by activating or blocking their downstream responses.

According to the study, activation of C5aR1 receptor by C5a triggers robust mobilization of immune cells like neutrophils which may result into severe hyper-inflammation, and subsequently, inflammatory disorders. Thus molecules which can block the interaction of C5a with C5aR1 and downstream signal transduction are proposed to be promising therapeutic candidates to combat inflammatory diseases.

However, recent studies have shown that activation of C5aR1 by C5a may also result in inhibition of cytokine called interleukin-6 (IL-6) which is desirable to overcome inflammatory symptoms. Therefore, conventional C5aR1 antagonists may not be the optimal therapeutic candidates as they will also compromise C5a-induced inhibition of IL-6.

This problem was addressed by designing ligand C5apep which maintains the desirable properties of C5a i.e. inhibition of IL-6 but it has significantly lower capacity to trigger neutrophil migration compared to C5a. “C5apep can be a superior choice over conventional C5aR1 antagonists. Such ligands are known as “biased ligands” because they preferentially activate one functional outcome over the other, and this conceptual emerging framework has refined the landscape of novel drug discovery targeting GPCRs,” said Shubhi Pandey, the lead author in this study.

Prof. Shukla says, “Our study uncovers the first instance of a functionally biased ligand in the complement system that has the inherent potential to improve the therapeutic design in inflammatory diseases. We plan to carry out animal studies in future to measure the therapeutic potential of this novel ligand and also understand the molecular details of its interaction with the receptor at high resolution using structural studies.”

Journal Reference:
Partialligand-receptor engagement yields functional bias at the human complementreceptor, C5aR1
at May 04, 2019 No comments: 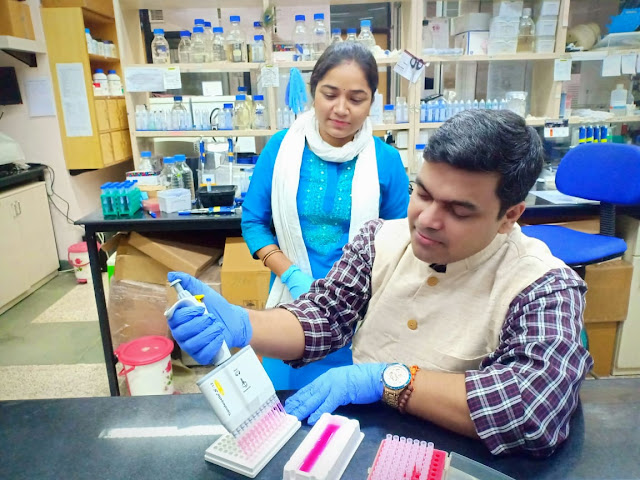